SK And Raven Weigh In On Their “Love is Blind” Romance Have you been watching Season 3 of “Love Is Blind”? 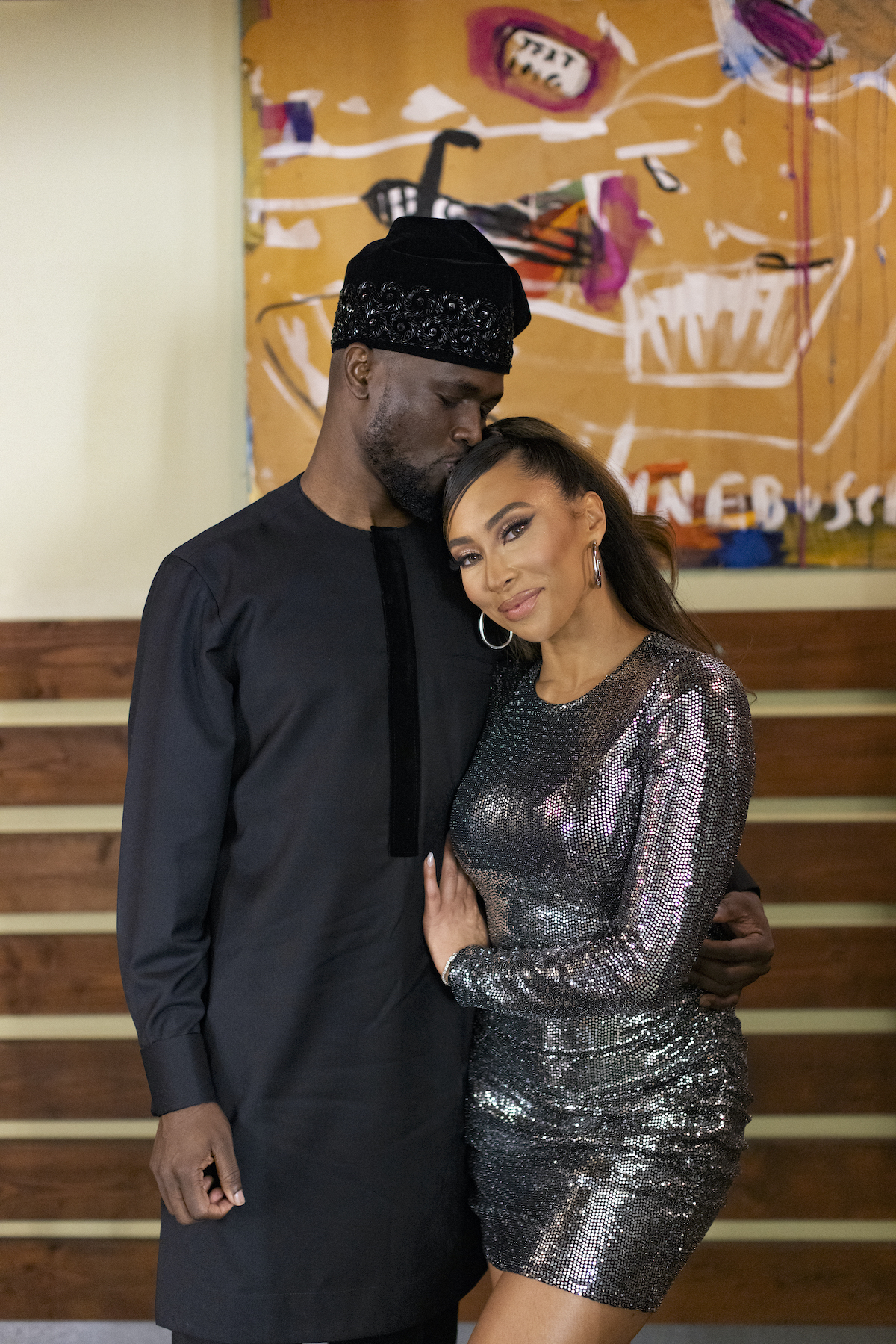 With the recent divorce of Season 2 “Love Is Blind” couple Iyanna McNeely and Jarrette Jones’, we’ve been hoping, wishing and praying for a “Love Is Blind” love story worth rooting for. Season 3 stars Sikiru “SK” Alagba and Raven Ross have had us in our feels 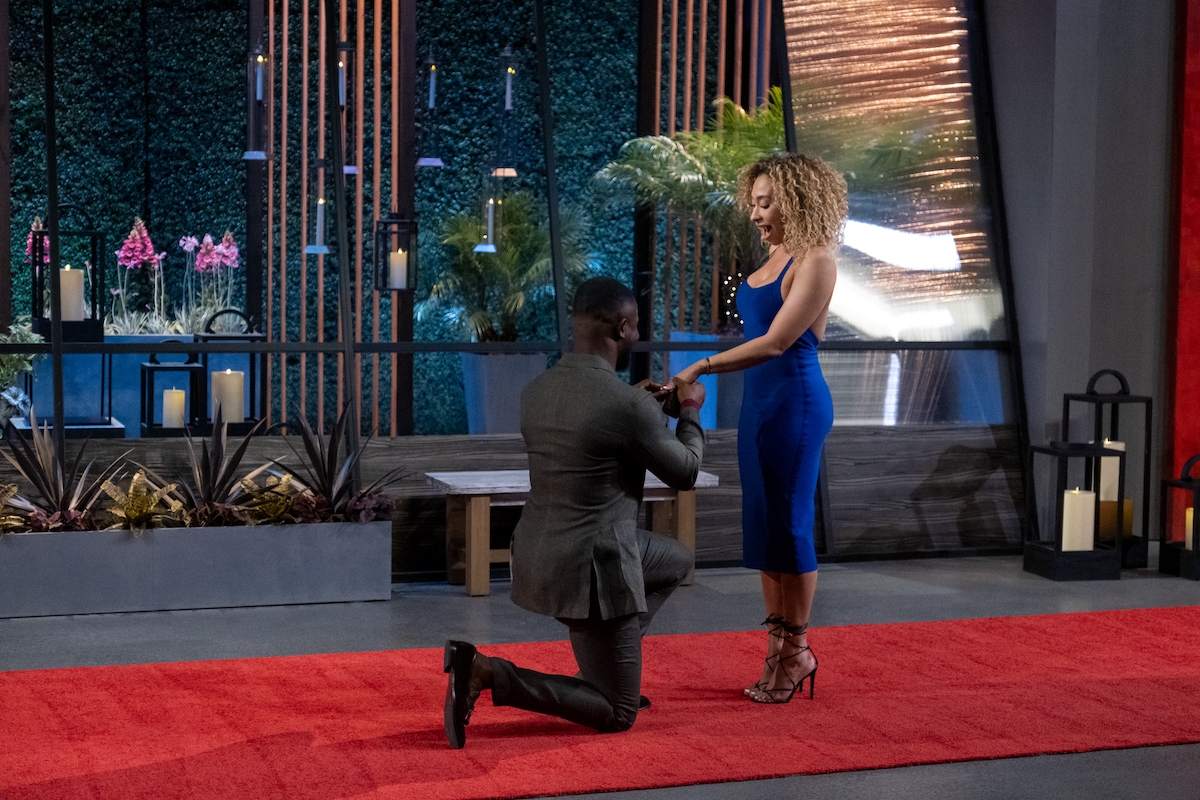 In the beginning of this season of “Love Is Blind” Raven found herself deciding between two men, Bartise and SK. Initially, Netflix focused in on her connection with Bartise, who was also pursuing a potential match with Nancy. Despite having common interests like their shared passion for fitness, as the series continued, it became clear the two did not have an emotional connection (one episode featured Raven exercising in her pod as Bartise opened up about one of his most difficult memories). Then we had a chance to see Raven’s budding relationship with SK, which ended with a proposal. Bartise also proposed to Nancy, but may have had some second thoughts during the couples’ honeymoon trip, where he didn’t even try to conceal his physical attraction to Raven. In a truly awkward TV moment Bartise called Raven a smoke show during a conversation with his fiancé Nancy.

Raven spoke with Variety about the memorable moment:

“Oh my God. SK and I watched it together for the first time,” Raven told Variety about the cringe-worthy comment. “We were both like, “What is going on?” Of course, we had no idea of any of this. I just feel so bad for Nancy, because you can tell on her face, she’s like, “Is this really happening now? Are we in a different universe?” It was just crazy to see. Of course, yeah, I’m flattered, but, can you at least just stand by your woman? It’s cringe.”

“Nancy and I have spoken a lot,” Raven continued. “I don’t know necessarily about that moment, but I’m sure that was hard for her. It was hard for me to watch. Her journey has been so hard. I let her know that I’m here for her. Throw the whole man away. I am Nancy’s No. 1 fan.”

While the couples’ honeymoon episodes shined a light on the fractures in Nancy and Bartise’s relationship, they also showed the slow build that SK and Raven experienced. The couple was slow to get physical, preferring to allow their connection to grow naturally with more subtle forms of intimacy. 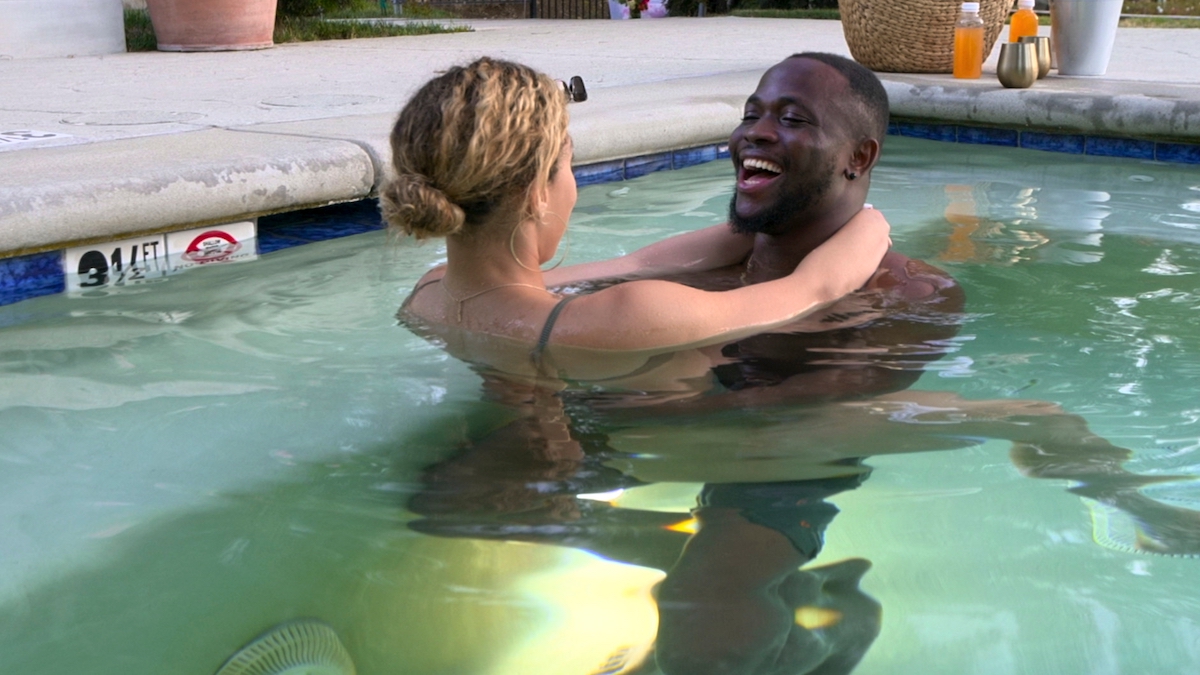 But even with the sweet moments that were shown, SK recently told PEOPLE that he felt audiences were somewhat cheated out of seeing his and Raven’s romance unfold:

“I feel like the audience missed out on really on that love story, on how it even came to be,” the data engineer continues. “If I were watching it myself, not being in the experience, I would have a lot of blanks.” 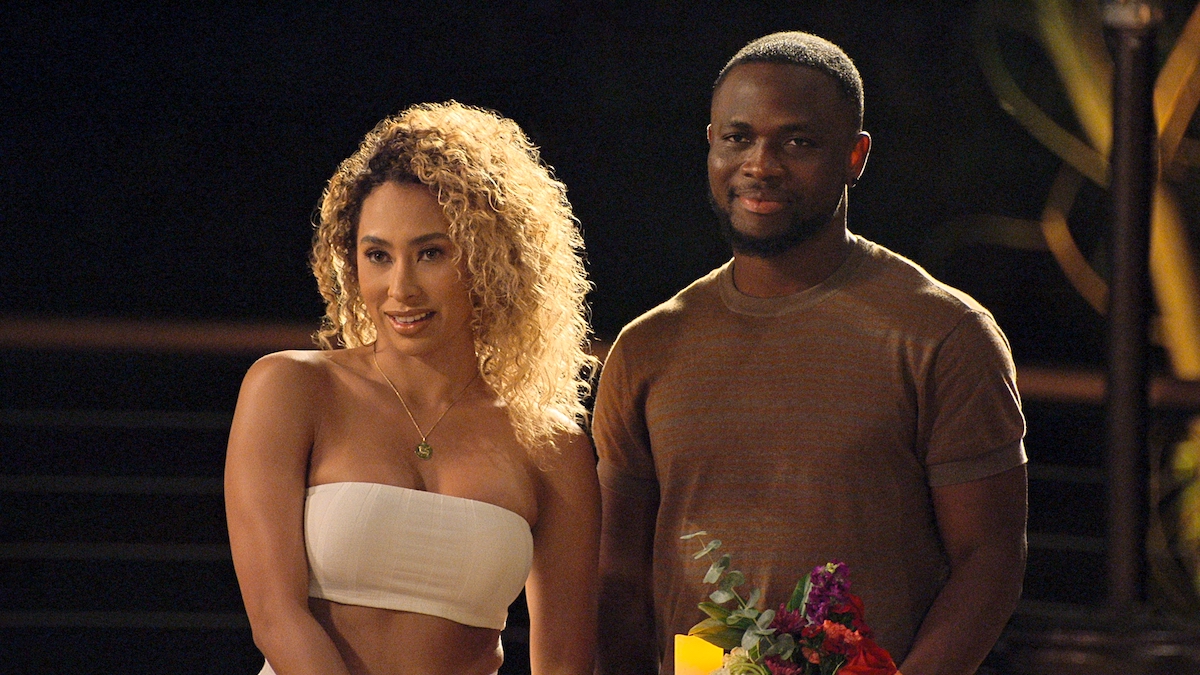 What we did get to see was a whole lot of serious conversation about SK moving to California and whether Raven was willing to make long-distance work.

“In our very first conversation, I brought it up,” SK told PEOPLE. “I was like, ‘I’m actually getting ready to go to grad school in the fall.’ And she didn’t really have a problem with that. We said we’re going to do things long distance, and we’re going to try it out,” he explains. “But of course, it’s easier said than done.”

Raven spoke similarly about the issue in her interview with Variety.

“It’s so funny now — looking back, I was just trying to be so open-minded,” Raven told Variety. “I knew that our connection is so strong, so let’s just figure it out, and take it day by day. Regardless of where we are geographically, I don’t want to live without that person. It’s so funny looking back on it after knowing SK so much better now: That is totally an SK thing. He just didn’t realize, and was just like, “I’m gonna go on this show! Oh right, I have grad school too!” Of course it was not ideal, but it became part of our story. I wouldn’t have it any other way.

Looking back, it may have been a production decision to focus on their potential issues with his move. After all, in episode 10, during their wedding, SK ultimately tells Raven he can’t marry her.

“We have a very unique and complex set of circumstances. I feel like today is not the best time for us to do this,” he said, before explaining in a confessional that he would’ve felt guilty marrying Raven “when I know there are so many unanswered questions.”

“I was clearly really shocked,” Raven told PEOPLE. “I feel like the whole time, I was definitely not portrayed as an emotional person. So it was probably shocking for everyone to see me be such a crybaby.”

“But it was a really emotional day,” she continued. “I definitely was unprepared. We had gone through this whole experience. I was definitely on cloud nine after our build-up of having a great relationship, so I was a little shocked.”

During the episode we see Raven hugging SK before walking away from the altar and eventually retreating into a bedroom before collapsing on the bed, still clad in her wedding gown. 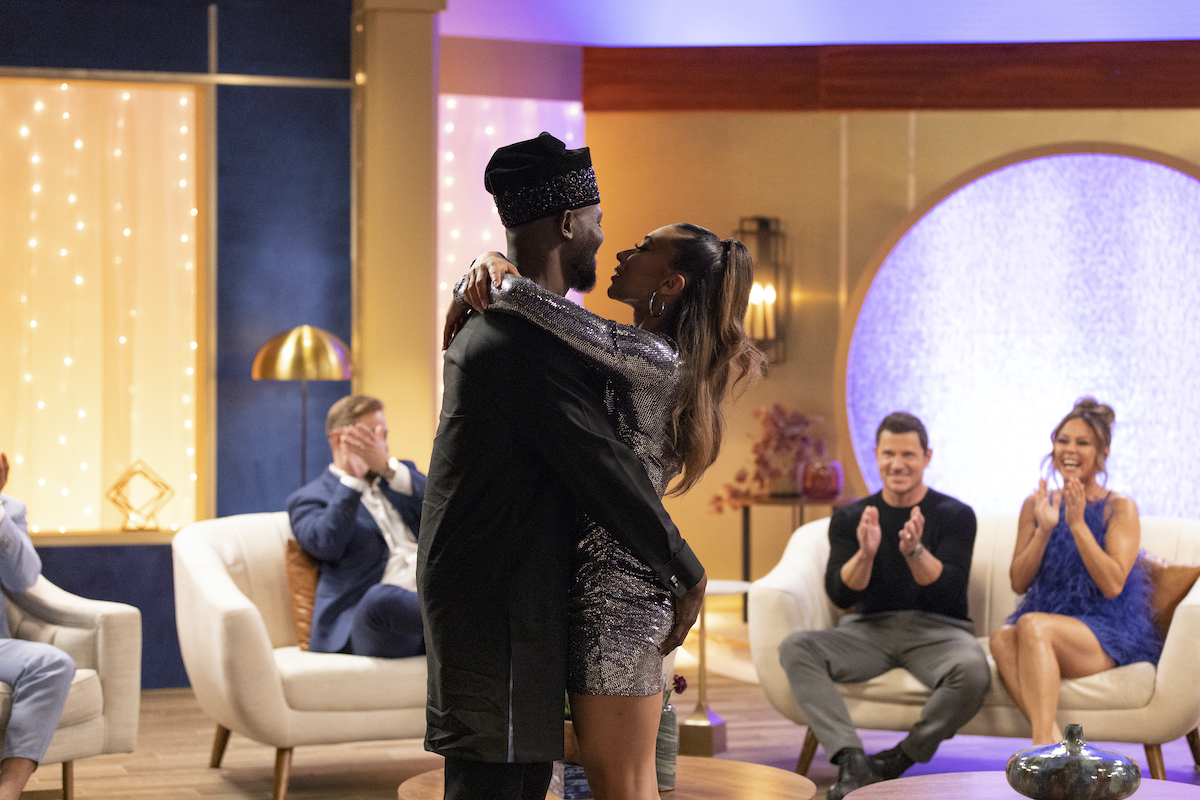 As sad as we were to see SK say now — we were ecstatic after watching the reunion, where the couple revealed they are still together.

After the wedding, he reached out and said, “I’m sorry. I hope we can rebuild things and just keep going with our connection in the same way,” Raven told Variety. I was like, “Yeah, you have to say sorry, sir!” Luckily, after a few days, we were in the same place mentally of, “OK, I don’t want to lose this person. So how do we move forward?”

During the season we were able to see how SK’s family supported him and Raven through their relationship — and audiences were particular taken with how his mom embraced her. 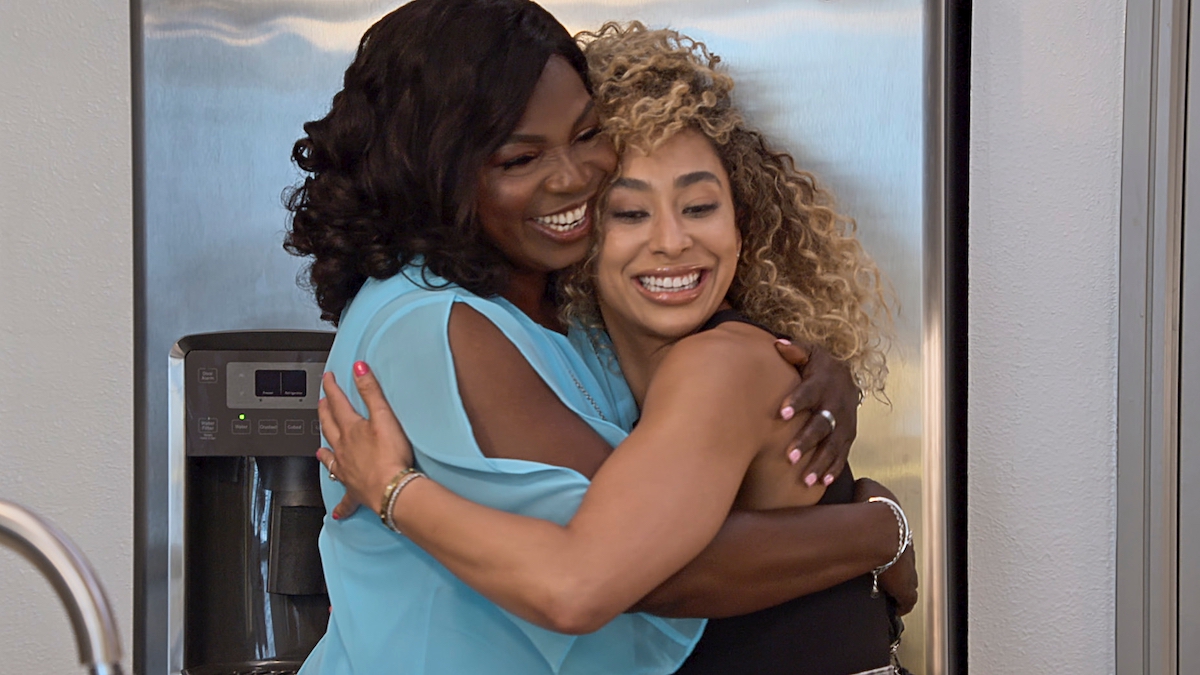 Raven’s family made the decision not to attend the couple’s wedding early on, and their reticence was disconcerting to SK’s family. Fortunately, since the show has ended, Raven said her family has come fully on board with the relationship.

“We’ve visited my family,” Raven told Variety. “I’m originally from New Orleans, so we went down to New Orleans. My family has come to Dallas. We’ve stayed at my house. We’ve done it all. We visited his family a lot in Austin. We’ve all made those connections, and he feels a lot better about it. My mom just really loves him.”

This is great news! It’s not exactly the happy ending we were hoping for initially but we love that ultimately Raven and SK proved “Love is Blind” when it comes to them. It’s also within the realm of possibility that this couple will ultimately walk down the aisle and BOTH say “I do” in the future.

“We’ve only talked about it once or twice, because neither of us are in the place to plan a wedding immediately,” Raven told Variety. “I’ve said that’s not until at least two years. I’ve got to shake this one off first! I’ve got to let everyone forget about this one!

We love to see it. We’ll be following Raven and SK on social media to keep up with this love affair and patiently awaiting what “Love Is Blind: After The Altar” holds for them!