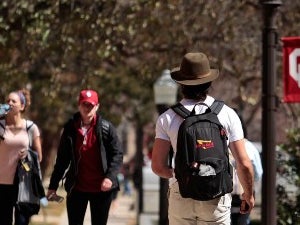 French heiress Léone-Noëlle Meyer announced on Tuesday that she has given up her fight to reclaim a work by famed Impressionist painter Camille Pissarro that had been stolen by Nazis and was discovered to be in the possession of the University of Oklahoma.

As the BBC reports, Meyer said in a statement that “after all these years, I have no other choice but to take heed of the inescapable conclusion that it will be impossible to persuade the different parties to whose attention I have brought this matter.”

“I was heard, but not listened to,” she said.

A prior agreement had been in place in which the painting was rotated between France and the U.S, which Meyer had sought to overturn.

The University of Oklahoma had threatened to sue Meyer unless she dropped her legal action. A U.S. court found that Meyer had violated a settlement that she had negotiated, according to the BBC.

Meyer, 81, inherited the Pissaro painting, titled “La Bergère Rentrant des Moutons,” or “Shepherdess Bringing in Sheep,” from her adoptive parents, Yvonne and Raoul Meyer, after her biological family was killed in the Holocaust.

The painting was stolen by Nazis in the 40’s and was eventually bought by an American family who believed their purchase had been made in good faith. This family donated the painting to the University of Oklahoma’s Fred Jones Jr. Museum in 2000.

NBC News reports that Meyer’s adoptive father had fought for years to reclaim the painting after it had been stolen by Nazis from a bank vault and ended up with an art dealer in Switzerland.

By the time Meyer discovered the painting’s whereabouts in the U.S., a statute of limitations had been had passed. Instead, Meyer allegedly agreed to share the painting with the school, with the painting returning to the university if she was unable to find an art gallery willing to take it after her death.

But the BBC reports that Meyer’s attorney argued she had been forced into the agreement, with the expensive transportation costs associated with the panting preventing French art galleries from permanently taking it in.